Vinyl is in the midst of a comeback. Perhaps it’s due to the unpredictable whims of Millennial trends. Or, perhaps it’s the byproduct of a digital backlash from consumers who want to own their music, rather than paying for a Spotify subscription. Either way, record sales are increasing, and manufacturers are struggling to step up to the challenge.

The Economics of Nostalgia

In 2005, U.S. vinyl sales hit an all time low of $27 million. Ever since that low, the industry has been on a gradual, but steady incline. Now, domestic vinyl sales are predicted to bring in roughly $1 billion in 2017 alone.

That equates to about 40 million LPs distributed to hipsters and nostalgics across the states. In other words: a 2,600% increase in production in just 12 years.

That's a lot of records to be made.

Among the 16 remaining pressing plants in the U.S. is United Record Pressing in Nashville, Tennessee. With the new demand, they push out 30,000 - 40,000 records per day. Just to keep up, the company has to keep the plant fully operational 24 hours a day, 6 days a week. Clearly, United Record Pressing is nearing their production capacity. If other domestic plants aren't already close to their production limit, then they will be soon.

In its heyday 36 years ago, the vinyl industry was producing 1 billion units per year. To put this in perspective, that’s 25 times the amount predicted for this year’s “record” high.

While vinyl sales are much higher than they’ve been in recent years, manufacturers have historically been capable of much more. So why haven’t other facilities opened up to take the strain of plants like URP in Nashville? 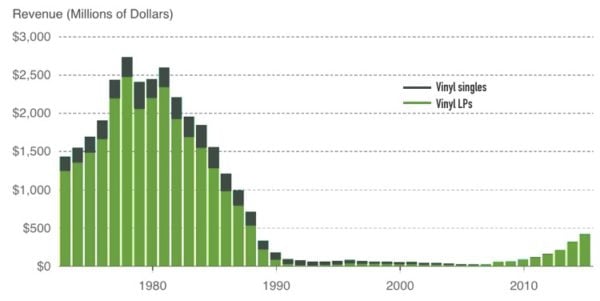 As other industries have automated many of their manufacturing processes, vinyl production is still mostly assembled by hand. Millar describes the process: 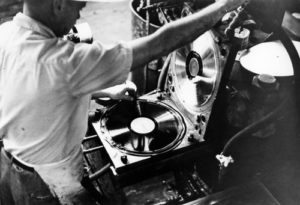 “The records accumulate on a press and stack up on a spike, where an inspector comes and grabs those, by hand, off the press, takes them to an inspecting table, where each record gets visually inspected one by one. And then we also listen completely to about one record per press per hour.”

Finding properly trained people for this very human process is a challenge that limits growth at plants like Matt Early’s Gotta Groove Records. Early explains, “Really, it’s an art. It’s something that takes a while to learn.”

Even record company giant Sony, who announced they are starting to make their own records again in Japan, is facing similar challenges. Japanese newspaper Nikkei reports that "Cutting is a delicate process, with the quality of sound affected by the depth and angle of the grooves...and Sony is scrambling to bring in old record engineers to pass on their knowledge."

In hindsight, nobody could have predicted that an outdated form of technology would see such a resurgence in popularity. For all we know, 8-tracks or cassette tapes could have just as easily won the manufacturing lottery. Nevertheless, there are important lessons that manufacturers can glean from this outlier in product demand.

Market analysts couldn’t have predicted it. Research firms couldn’t have foreseen it. No quantity of charts or spreadsheets could have anticipated the impact that nostalgia would have on vinyl demand.

Trends change and markets shift. It’s not our job as manufacturers to become clairvoyants for our industry. Rather, it’s our responsibility to be prepared for either outcome.

As Sony is now experiencing, relying on people to “pass on” knowledge is difficult. Documenting important skills and procedures is what turns individual knowledge into a group asset.

Avoid “passing on knowledge” as your primary training method.

Just because tasks appear more like art forms, doesn’t mean they don’t need standards. Standards don’t necessarily need to be overly-precise in their articulation but can exist as formalized foundation for production techniques.

This helps set a baseline for procedures and allows people to work together to improve processes.

Without Standard Work, documented processes are often not used, or so out of date, that following them could become problematic. Standard Work is the foundation for any...