The Dozuki book club is your go-to place for industry books and resources. Our team curates knowledge from industry experts, letting you identify key takeaways and start implementing solutions quickly. 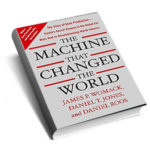 "The Machine That Changed the World" by James P. Womack is the bestselling book that first articulated the principles of lean production, this management classic was the first book to reveal that Toyota’s lean production system is the basis for its enduring success.

The Best of Both Worlds: Lean Production

The Origins of Lean Production

Before we look forward, we must look to the past.

Before WWI, craft production was the dominant method for automobile manufacturers.

The key to Mass Production: “Complete and consistent interchangeability of parts and the simplicity of attaching them to each other.”

"Ford took it as a given that his workers wouldn’t volunteer any
information on operating conditions ... much less suggest ways to improve the process."

The Rise of Lean Production

The need for lean production was born in Japan because:

"The lean plant has two key features: (1) it transfers the max number of tasks and responsibilities to workers actually adding value, and (2) it has a system for detecting defects that quickly traces every problem to its ultimate cause."

The Elements of Lean Production

“The truly lean plant has two key organizational features: (1) it transfers the maximum number of tasks and responsibilities to those workers actually adding value to the car on the line, and (2) it has in place a system for detecting defects that quickly traces every problem, once discovered, to its ultimate cause.”

The dynamic team of operators who have the knowledge, motivation, and skills to improve processes is what drives a lean factory.

During the product development lifecycle, cross-departmental teams in Japan were so connected, they were able to develop machinery and parts for new products while designs were still being finalized, shaving years of the design lifecycle.

Suppliers are brought in too late to the design process

The Lean Producer and the Consumer

How to Improve Performance with Preventative Maintenance

Equipment failure is a known evil in the manufacturing world. But unplanned downtime carries a significant cost and hurts overall performance. This week Brian sits down with...

Six Sigma, Lean, and Quality Management are distinct approaches to reducing waste, defects, and providing value to the customer.

The world of Lean Manufacturing is full of acronyms and industry buzzwords. No glossary could encompass the full breadth of terminology, but it’s always helpful to have a...