Maine based Oakhurst Dairy was recently sued by a handful of truck drivers seeking more than four years worth of overtime pay—but the suit wasn’t about milk distribution at all. Rather, the legal battle revolved around the use (or lack thereof) of a single comma. But grammar wasn’t the problem—standards were. 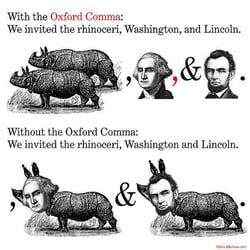 The Jury is Out

The comma has been a source of contention among writers for quite some time now. Specifically, the serial comma, more commonly known as the Oxford comma, has had authors up in arms for ages. For those who are unfamiliar, the Oxford comma is used after the second-to-last item in a list, or the “penultimate,” to clarify lists of three things or more.
Proponents argue that the comma adds necessary clarity, and opponents think that in most cases, it muddles things.

Whether or not you think the punctuation is effective probably depends on how strict your English teacher was as a child. And despite some strong opinions, there isn’t an overwhelming consensus on whether or not the comma should be used. Or in more appropriate words, in regards to the use of the Oxford comma, the jury is still out. 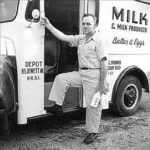 Fortunately, the state of Maine has legislative standards outlined for the use of grammar in legal documents. Unfortunately, these standards are confusing and somewhat contradictory. Trust me, we checked. Even our experienced technical writers had trouble parsing through the nuances in some of these guidelines.

Packing for shipment OR distribution of

Because drivers are only responsible for distribution, and not packing, the comma-less space between ‘shipment’ and ‘or’ created some ambiguity. Is only the act of packing (for shipment or distribution) exempt from overtime pay? Or is distribution a separate act that is also exempt?

Without the comma, it sounds like ‘packing for shipment’ is one activity and ‘packing for distribution’ is another. In this light, it could be interpreted that the ‘distribution’ of products is not on the list.

Punctuation policing aside, this case study is about standard procedures and how conflicting standards are just as bad as no standards at all.

It’s interesting that a milk delivery man reignited a literary debate, but from our perspective, the real tragedy was poor standardization.

While acknowledging the impact that punctuation can have on a statement’s meaning, the Maine legislation states,

“Revise any sentence that relies on punctuation to convey its meaning.”

They even go so far as to say,

“Commas are probably the most misused and misunderstood punctuation marks in legal drafting and, perhaps, the English language. Use them thoughtfully and sparingly.”

Ok, fair enough, Maine. Grammar is hard, avoid using it when you can, and be careful when you do; especially commas.

What immediately follows these grammar-conservative standards is a list of specific rules and examples for how to use commas.

“Although authorities on punctuation may differ, when drafting Maine law or rules, don’t use a comma between the penultimate and the last item of a series.”

The list goes on, from rules about “parenthetical phrases” to guidelines for “restrictive clauses.” Great. So now we have some rules about how to use the complicated and ambiguous grammar that we’re not supposed to use.

Which Standard is it Anyway?

In an attempt to be overly thorough, Maine created legislative writing standards that were essentially just confusing. To be fair, we get it. Making precise grammar rules for legislation is a messy endeavor. There isn’t a reigning authority on punctuation, and opinions can vary. But where manufacturers can find some comma-n ground (sorry, I couldn’t resist) is in the importance of good standards. 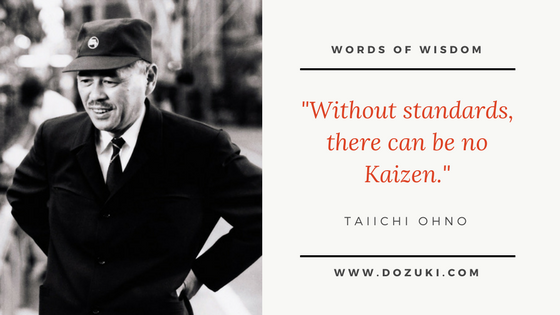 In manufacturing, we know that standards serve as the foundation for continuous improvement and Kaizen. But regardless of industry, it’s hard to follow a standard that leaves you confused after reading it. Improvements can only take effect if we understand the standards on which they’re built. It’s also difficult to improve upon a foundation that you don’t fully comprehend.

Ensuring that standard processes (SOPs) are effective is crucial because these procedures are the ones that get reproduced on a large scale. As Oakhurst now knows, one small, repeated misunderstanding can quickly add up to a lot of waste. Companies should learn from the dairy producer's legal debacle and take a continuous improvement approach to their documentation.

"One small, repeated misunderstanding can quickly
add up to a lot of waste."

Ultimately, the case with Oakhurst Dairy got overturned. The lower courts declared that the spirit of the law was clear, and parsing through grammatical intricacies can’t change that. That being said, Oakhurst Dairy was forced to spend months in litigation battles, wasting time and resources trying to clarify ambiguity, in both punctuation and standards.

How Sloppy Revision Control Cost WIPP Half a Billion Dollars

In 2014 a nuclear Waste Isolation Pilot Plant (WIPP) in Carlsbad, NM was the victim of poor revision control practices that lead to a half-billion dollar mistake; shutting...

Inside the Mind of an ISO Auditor

Getting inside the mind of an ISO 9001 auditor is crucial to a successful ISO audit. Think of it like a gift — even the best of presents can be unappealing when wrapped in...

Vinyl is in the midst of a comeback. Perhaps it’s due to the unpredictable whims of Millennial trends. Or, perhaps it’s the byproduct of a digital backlash from consumers...